Here are a few little known facts about Jonathan

Q. What was Jonathan's first recording?

A. The first known professional recording of Jonathan known to exist is a solo performance in a school concert of the Messiah in 1960

Q. Who or what were Jonathan's musical influences?

A. Amongst the artists who influenced Jonathan were Buddy Holly, Elvis, The Beatles, Bob Dylan and the Bee Gees.

Q. Who were Humpy Bong and what connection have they with Jonathan?

A. Humpy Bong was a group formed by Jonathan and his then producer Colin Petersen. The line up is not certain but amongst the musicians where Colin Petersen on Drums, Tim Staffell on Guitar and Jonathan on Guitar.

Q. What is the connection between Jonathan & The Bee Gees?

A. Colin Petersen was the drummer for the Bee Gees for several years, he saw Jonathan playing in a restaurant and became Jonathan's producer, his wife became Jonathan's personal manager. Jonathan was a Bee Gees fan having credited them with influencing his music because of the chord changes etc that they used in their songs. In 1991 Jonathan performed at a Bee Gees tribute concert and formed a cover band for the occasion which included his son Greg on lead guitar, Jonathan played drums.

Q. What instruments does Jonathan play?

A. Jonathan is a multi-instrumentalist, he plays mainly the Guitar, Piano and Drums.

Q. What is connection between Jonathan & Eric Clapton?

A. Eric Clapton played guitar on the track 'Don't you believe it'. This appeared on single and on Jonathan's first LP

Q. What is the connection between Jonathan and Queen?

A. Jonathan met Freddie Mercury through the market stall that Freddie ran in London. Through Freddie, Jonathan met Brian May and the band Smile, he invited them to the studio where they performed at least two songs together, one of these was called 'Fork In The Road' the other title is unknown. Jonathan doesn't remember for sure if a tape machine was running but imagines it would be, if anyone knows the whereabouts of this tape we would love to hear it!

Tim Staffell who was a member of the group 'Smile' went on to work with Jonathan appearing on Top Of The Pops with him on the song " Don't you believe it." Eric Clapton played guitar on the track but was unavailable for the Top Of The Pops appearance so Tim Staffell had to play his parts. Tim remained a musician associated with Jonathan and later became a member of Jonathan's band 'Outside'.

A. Jonathan has retired from the music business and runs a small family business in the west of Great Britain, he performed his first concert in nearly 30 years at the Rockingham Arms Folk Club near Rotherham, South Yorkshire on January 9th 2004. This was supposed to be a one-off concert for some friends and loyal fans, however following this night Jonathan decided to undertake a short uk tour to say thank you to his fans. His final gig was at Middlewich on 14th june 2008. Due to his declining health he will sadly never perform again.

Q. Is it true that Jonathan once appeared with Bob Dylan?

A. YES! But not as you might expect. When Jonathan was a teenager he saw a load of people gathered around a limousine in Dublin, being curious he went to peer through the window of the car to see what all the fuss was about, inside was Bob Dylan. If you watch the documentary film ‘No Direction Home’ of Bob Dylan and watch very closely you will see a young Jonathan peering through the car window at his musical hero! See Below: 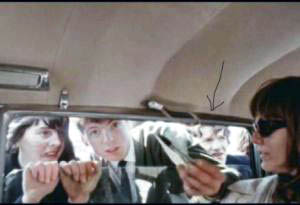 Lastly, did you know that Tommy Steele is reputed to have once performed a version of Jonathan's classic 'The ballad Of Cursed Anna' on TV!